India’s Tokyo Olympics medal winners received a grand welcome by the government in a dazzling felicitation ceremony held at the Ashoka Hotel in New Delhi on Monday with Sports Minister Anurag Thakur saying that their journey is an “incredible story of resilience and sporting excellence”.

Gold medal-winning javelin thrower Neeraj Chopra was the cynosure of all eyes in the delayed ceremony, held a couple of hours after the seven podium finishers made their way out of the airport amid utter chaos.

Thousands of fans waited outside the airport to welcome wrestlers Ravi Kumar Dahiya and Bajrang Punia, boxer Lovlina Borgohain and the men’s hockey team, who arrived from Tokyo earlier in the day.

At the felicitation ceremony, they were presented mementos and shawls by the minister. Both the bronze-winning men’s hockey team and fourth-place finishing women’s team cut cakes after arriving at the hotel.

WHO SAID WHAT AT FELICITATION CEREMONY

“Thank you all for the support. This gold medal is not just but for the entire nation. I have been roaming around with this in my pocket since then. I haven’t been able to eat or sleep properly since then but everything feels fine when I look at it.

“Competition was really tough, but you should never get scared by looking at your opponents. Just give your 100% and don’t be scared of anybody. When I threw the javelin for the 2nd time, I thought it would be my best attempt. My back and shoulders were paining after the event the next morning,” Neeraj Chopra, who was the final athlete to be felicitated, says to a loud applause from everybody present at the Ashoka Hotel. “We started from our village and then we came to Delhi. When I saw how Sushil Kumar and Yogeshwar Dutt got medals in wrestling, I got inspired by that and wanted to do the same for my country,” says Ravi Kumar Dahiya, who won the silver in wrestling to match Sushil’s 2012 feat.

“We are all like a family, when we come back with the medals it is for the entire nation. I would like to call Savita Punia the Great Wall of India because she deserved the name for the saves she made. Unfortunately, they could not win the medal but made the entire nation proud,” says Sreejesh. 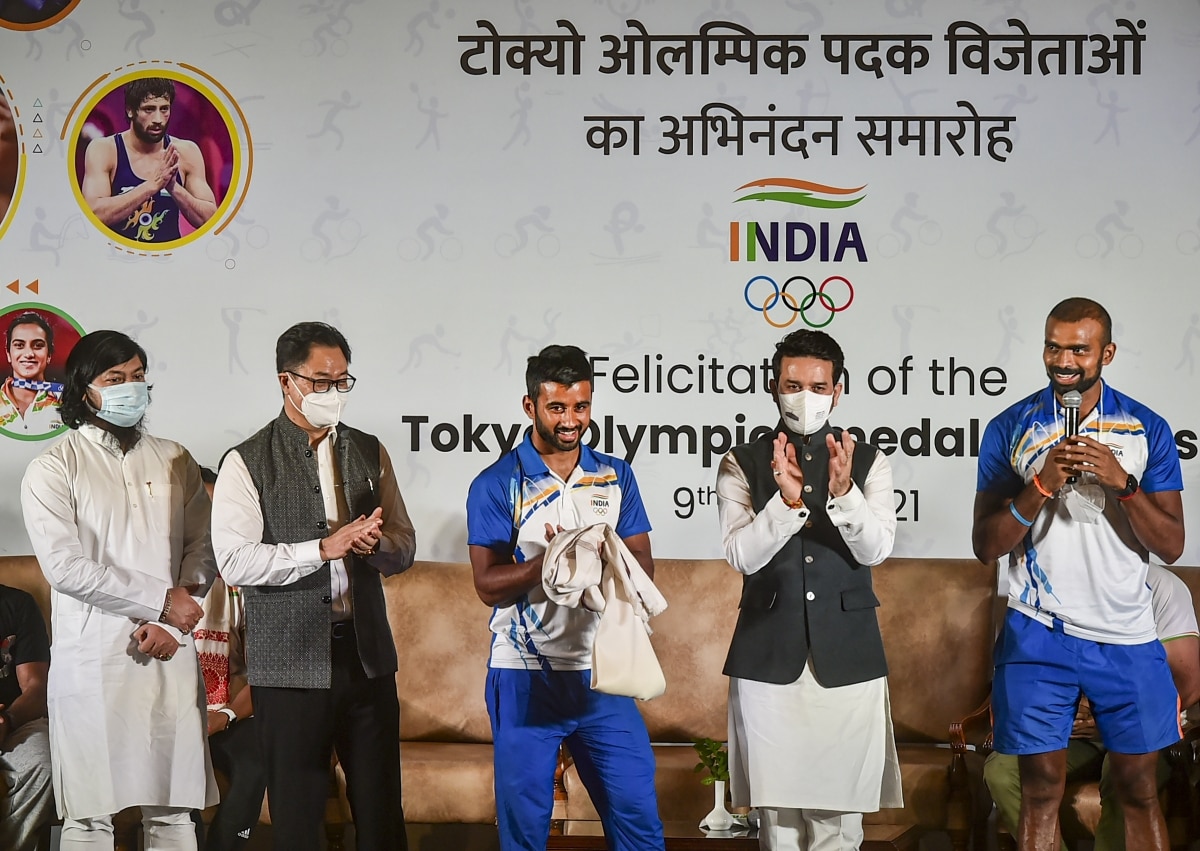 “I would like to thank the SAI, IOA because they helped us during our difficult times. They told us only to focus on the tournament and assured us of everything we needed for the Games. I would like to also thank every medal winner, especially Neeraj Chopra,” said Manpreet Singh.

“We had a mixture of youth and experience in our team and they showed that at Tokyo 2020,” says India hockey coach. 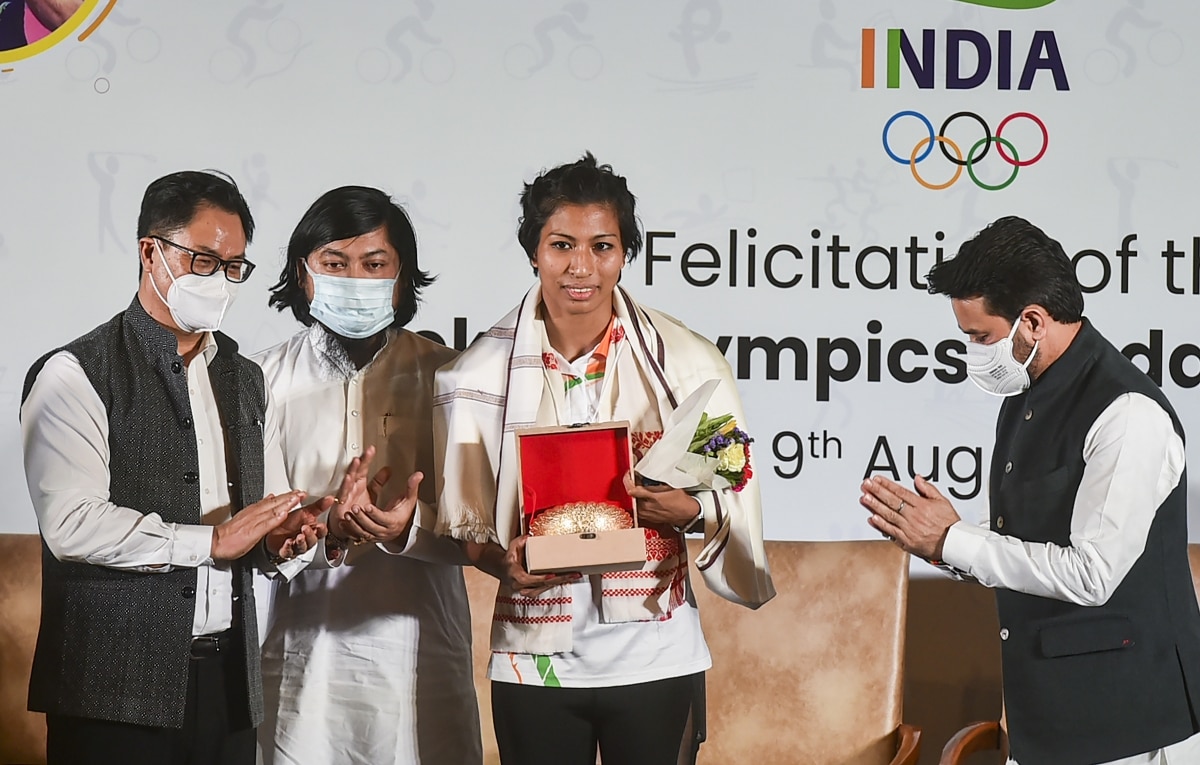 “I feel really good after coming back home. We knew people back home would be celebrating. We will keep trying and look to get more medals for India in the future.

“The last few days before my bout, I was only thinking about getting the gold for India. I only wanted the gold and that is what I will be trying to win in the Paris Olympics,” says Lovlina Borgohain, who won India’s only boxing medal at Tokyo 2020 in her maiden Olympic appearance. “Thank you all for the love and respect we have got. It feels like I have won a medal again today. About the injury, it was my last bout so I wanted to give it my all, I didn’t care about the knee injury.

“Even if my knee had broken it wouldn’t have mattered to me I just wanted to give my best and get the medal,” says Bajrang Punia, who won the bronze in wrestling for Team India.

“This evening is for the Olympians who have made India proud. I would like you all to cheer for them. On behalf of 130 crore Indians, I would like to congratulate our Olympians. We are so proud of you.

“Tokyo Olympics had many firsts for India. The biggest contingent of 128 athletes went there, we won 7 medals. Neeraj Chopra ended our 121-year wait for an athletics medal. Our national anthem was playing in Tokyo but Indians were celebrating here,” Anurag Thakur said.

“There is nothing bigger than the Olympics. From the entire nation, I would like to thank all our athletes and medal winners. These are the moments where you cannot express in words, you can only experience it.

“From the Prime Minister to every kid in the country, the entire nation was cheering for India. The entire country was behind our Olympians. Thank you for uniting the country, we are all proud of what you all have achieved.

“We had a lot of other things prepared for you all before the Games, from food to every thing you needed we had ready but Covid put all our plans down the drain,” says former Sports Minister Kiren Rijiju.

“The athletes who have made the country proud at the Olympics, I feel honoured to be here among all these people. There is no bigger honour for a sportsperson than to see the Indian flag flying high at the Olympics. I am feeling so happy to see these athletes realise their dreams,” says Nisith Pramanik, MoS Home Affairs.

Xiaomi Mi Pad 5 to launch on August 10, may come with a stylus